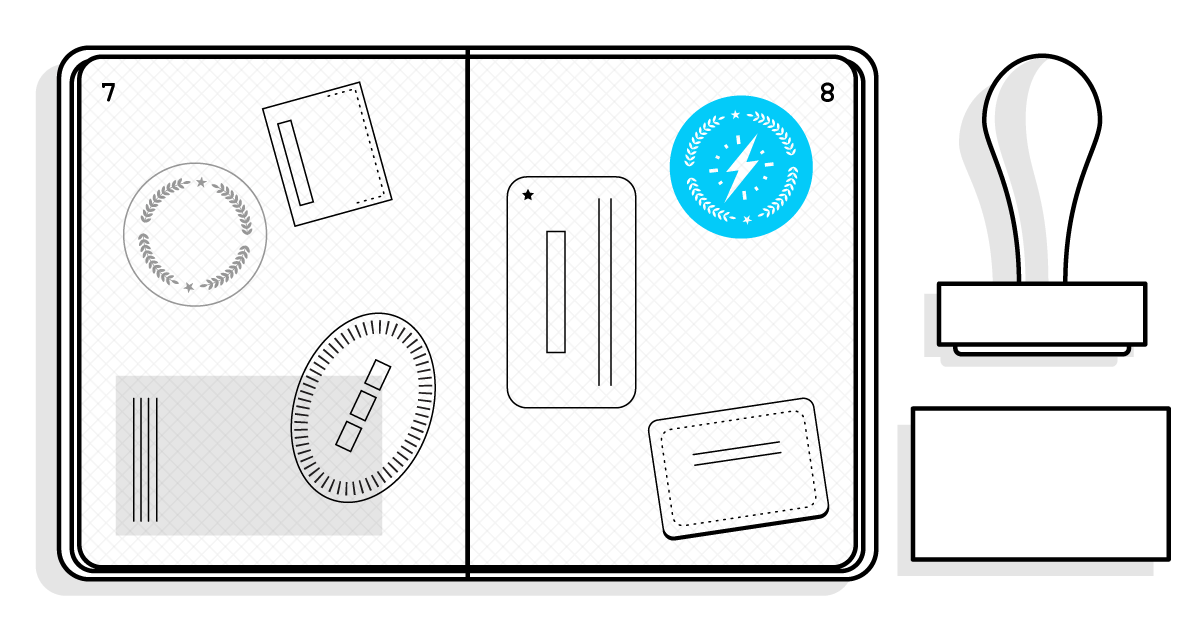 Three truths — two that are probably self-evident, and one learned through experience:

That third point spurred us to do some things that were maybe a little weird, but ultimately impactful, at our live conferences. More on that in a moment, but for now, suffice it to say it involved actual passport booklets and one-of-a-kind stamps for every attendee.

We’ve always felt that the most memorable and meaningful events bring together people who see things differently. This has been a through-line for all of the conferences and workshops &yet has convened: bringing together people from varied disciplines, backgrounds, and walks of life to learn from each other.

The particular mix of people has been unique to each event’s purpose and context. But whether we brought together various kinds of technologists under one roof, or got artists, designers, coders, activists, and business people to share a table, the results were the very definition of a whole greater than its parts: new projects were spawned, close friendships formed, and career trajectories changed.

There’s nothing wrong with bringing together people with a common set of backgrounds, experiences, and interests, of course — particularly if those people rarely have opportunities to share space with others like them. But it seems to us that one of the core purposes of gathering people is to get people out of being stuck in their bubbles.

Most of us tend to gravitate, by default, towards spending time with people who seem familiar and similar to us — it takes effort to push back against that gravitational pull. But when we get stuck in familiar bubbles, we get stuck in a pretty homogeneous version of reality.

Some of the most important learning we’ll do in our lifetimes will happen through exposure to unfamiliar perspectives. The only way we can access those perspectives is by meeting people who are different from ourselves, and learning enough about how they see the world that we open up our own mindset and point of view.

Our task as event organizers is to offer people experiences that they can’t (or are unlikely to) have on their own, in their everyday lives.

One of the most valuable experiences we can facilitate for our attendees is to provide them with paths to building trust and exchanging ideas with people who aren’t just like them. But you can’t just throw together a bunch of people with disparate experiences and points of view and expect magical outcomes — at least, not with any consistency. If you’re trying to build bridges, you need to create & facilitate them.

“The leadership task is to bring the gifts of those on the margin into the center” –Peter Block, Community: The Structure of Belonging

Where do you come from? Where have you been?

In 2012, while organizing the second RealtimeConf — a conference aimed at bringing together folks doing “JavaScript mad science” and open standards folks who had been detailing protocols and writing specs for decades — we landed on the notion that we could use elements of imagination and play to help forge connections between the people coming to the event. Since the two groups were very different culturally, but had lots to learn from and share with each other, we decided to invent a variety of fictional countries, and assigned each attendee to a particular nation, with its own flag and cultural markers.

As attendees arrived at the conference venue, they received passports (and the following year, we included letters of welcome from the fictional head of state of their nation — yes, we went all the way there), and were encouraged to visit as many of the other “countries” as they could, collecting stamps. Aside from introducing a playful and disarming exercise (an important pursuit in itself), we wanted to give attendees a shared experience of realizing some key truths:

The passports served as a physical reminder of those truths, and of the event’s mission — and they succeeded in acting as the bridge people needed to reach out and make connections with people different from them. They were the excuse people needed to talk about where they came from, where they had been, and where they intended to go next. And most importantly, to talk across, and through, differences — not only looking for common ground, but actively seeking to expand their own thinking.

Our passports were physical — and so were the stamps each attendee received, to stamp each other’s passports with. But as we shift into convening people remotely, we’re exploring how we might include some infrastructure that encourages participants to view their differences with a sense of play, and to actively seek out opportunities to connect.

Here are a few questions you can ask yourself as you’re planning your event: